Water hammer most commonly occurs when water is flowing through a pipe and a pump is stopped or a valve is quickly closed. The sudden halt in fluid flow in the pipeline will produce a pressure spike in the form of a shock wave, which will travel back and forth down the piping system, reflecting back from the end of the pipeline. The maximum velocity of this shock wave will be equal to or less than the speed of sound for that specific fluid.

For example, water at 70°F has a sound wave velocity of more than 4,800 ft/sec (1,463 m/sec). However, the dampening effect by which the material the pipeline is made from affects and dictates the pressure wave's terminal velocity. The shock wave will continue to oscillate back and forth down the pipeline, between the closed valve on one end and the end of the line, until the energy is absorbed and the pressure soon equalizes in the pipeline.

If a pump stops or a valve rapidly closes while the fluid is in motion, two things can happen:

Column separation is a vacuum pocket in which the vacuum pressure is continuous through the downstream end of the pipeline. Column separation creates negative pressure, which can be sufficient to cause the pipe to collapse, especially when the pipeline is located on a slope, with the water flowing downhill. Valve placement is important to maintaining pipe integrity; therefore, a valve should never be placed at the top of the hill without a downstream vacuum breaker valve close by. Otherwise, a valve that's closed at the top of the hill is more likely to result in negative pressure, which can cause the pipe to collapse.

A slow-closing isolation valve on pump control is more effective at eliminating water hammer compared to check valves, which prevent flow reversal but at a cost. The rapid-close action of a check valve will never be able to stop flow reversal before the pumping action ceases. Therefore, the slight flow reversal that suddenly stops against the back side of a check valve disc could produce a significant level of water hammer. Using external air or hydraulic cushions to slow the closing motion of the check valve offers only some benefit. The best way to eliminate water hammer on a pump control application is to use a control valve that will proactively close on command rather than reactively close when sensing flow reversal. 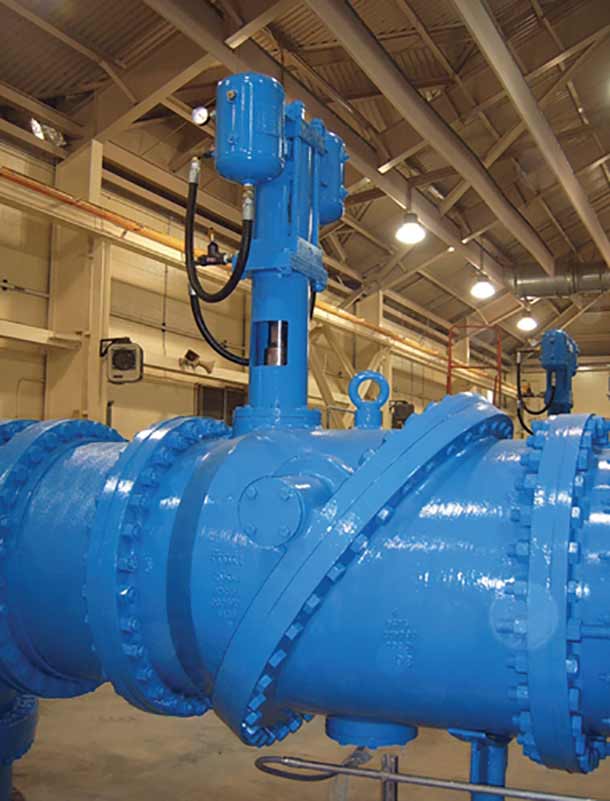 The slight flow reversal that suddenly stops against the back side of a check valve disc, such as this 36-inch check valve used in a low-service raw water pumping application, could produce a significant level of water hammer. The best way to eliminate water hammer on a pump control application is to use a control valve that will proactively close on command rather than reactively close when sensing flow reversal.

The sequence of operation for a pumping application includes pump startup and shutdown. The pump startup procedure is as follows:

The following steps make up the pump shutdown procedure:

How to Minimize Water Hammer

A surge analysis can be performed on the piping system to determine the proper amount of time required to open and close a pump control valve. But sometimes pressure surges occur when a valve is manually closed too fast in the water distribution network. You can't perform surge analysis on everything, so the best way to address pressure surges is to use isolation valves with slow-closing (taking a high number of turns to close) or characterized closing actuators.

The following formulas will help you determine how slowly to close a valve. The proper open and close rates of a valve can be calculated and practiced to ensure safe and proper pipeline operation.

To calculate the correct valve-closing rate, first calculate the critical closing time of the pipeline being analyzed. Use this equation to find this time in seconds (s).

L = length of pipe in feet

Next, determine the maximum head pressure due to water hammer, in excess of the initial head or initial pressure energy, in feet (h).

a = estimated or derived water hammer wave velocity from equation 1

Optimal Time to Close Valve. You have calculated the excess pressure due to water hammer (in feet; this is also considered the change in kinetic energy) and the critical time in which the pressure wave will travel from the valve to the end point of the pipeline and return (in seconds). You can now use equation 3 to determine the desired or adjusted time required to close the valve in order to not exceed a satisfactory net pressure in the pipeline.

This is an example of how to determine water hammer and solving for valve closure times. Say that you have 1,800 feet of ductile-iron pipeline running at 8 ft/sec, with initial pressure at 60 psi.

Using equation 1, determine the critical closing speed and wave velocity for the pipeline under review.

If a precise wave time is necessary, the accepted approach to determining water hammer wave velocity (a) can be derived using the following equation:

E = modulus of elasticity of the pipe being analyzed (psi)

d = diameter of pipe being analyzed (in.)

t = wall thickness of pipe being analyzed (in.)

Next, use equation 2 to solve for the maximum head pressure due to water hammer.

Lastly, using equation 3 to solve for the required minimum valve closing time (in seconds), we first determine the not-to-exceed contributing head pressure, which is set at 46 ft, or 20 psi.

Remember that the pressure that forms when you close the valve in the above calculation is additive (initial pressure energy + change in kinetic energy). So the initial line pressure must be added to determine the final line pressure. Initial 60 psi line pressure will increase to 80 psi after the valve closes.

If ductile-iron pipe (rated to 150 psi) were used in this example, it would be fine under normal conditions, but the pipe could rupture if the valve were to be closed more quickly.

Other Causes of Water Hammer

Water hammer can also be caused by other factors, including the following:

Try to avoid water hammer by taking the following actions:

Water hammer can be expressed in two ways: (1) as a pressure wave in a pipeline when a downstream valve is closed too quickly, which may cause a pipe to burst, or (2) as high vacuum when the same upstream valve is closed, which may cause a pipe to collapse. The remedy to eliminating both of these potential disasters when closing any valve is to design into the valve the ability to control its operation rate.

Proper valve operation time can be calculated through surge analysis and thus can completely avoid water hammer. Through proper pump station design, the correct valve choice can ensure that when a pump startup or shutdown sequence is initiated, the isolation control valve will be “smart” enough to eliminate surges upon pump startup or water hammer upon pump shutdown.

Electric motor operators provide only a fixed rate of control. Unless they have a pulse feature, electrically operated valves offer little in the ability to adjust to varying (diurnal or seasonal) application conditions. Check valves that have hydraulic cushions can play a role in these applications but only when application pressures and flow velocities permit the use of this type of valve. An operator should verify that the specified check valve can provide the control to minimize or eliminate water hammer.

Unfortunately, check valves that actually do control water hammer will carry a higher head loss burden. Optional valve features that claim to eliminate water hammer, such as external levers and weights or internal springs, will produce more head loss compared to a gravity check that has no ability to combat water hammer. This minimizing difference will be reflected in the respective valve's head loss table. Again, it's important to verify that the feature will perform as required.