Located in Southern Ontario at the confluence of the Grand and Speed rivers, Cambridge is the second largest community within the fast growing Region of Waterloo. With 98% of its water consumption drawn from groundwater, and remaining 2% from surface water, the City of Cambridge owns, operates and maintains 523km (325miles) of water mains to adequately distribute every drop of water to a population of 129,920.

Recognizing the need for conclusive data

Like many communities, the city of Cambridge grapples with increasing demands on their ageing, thin-walled cast iron distribution mains and copper services that were installed in the 1950s and 1960s. Further shackled down by the shortfalls in sustainable funding, the city’s physical water loss currently sitting at 21.7% is 7.7% above the national average. To reduce water loss to an acceptable level of 14%, the city is adopting a preventative maintenance and leak detection program – proactively finding and fixing leaks.

Before going forth with this program, the city engaged several outside contractors to carry out leak detection surveys of its water distribution network on an annual basis. The drawbacks from this approach were the severe lack of clear and conclusive data to pinpoint exactly where a leak might be, and the limited ability to audit and track overall performance of the contractors.

Another attempted solution was to use satellite technology to detect chlorinated water underground. This pilot study was not successful in Cambridge and was not instrumental in identifying leaks within the water distribution system.

The city’s efforts to reduce water loss has been supported by several strategies through the adoption of innovative technologies. Innovations related to repair techniques, proactive leak detection and a continued focus on asset management have led to significant reduction in water lost to date. One of the notable strategies is the use of acoustic leak detection technology to pinpoint leaks.

The Echologics LeakFinderST is an advanced window-based leak noise correlator that is used by field engineers to conduct a non-invasive leak detection survey by placing two magnetic surface sensors on valves or any contact point connected to selected sections of a water system. Once the sensors are in place, the correlator listens for variations of acoustic signals induced in the pipe by any means, for example, flowing water from fire hydrants or physically tapping on appurtenances such as valves. Analysis of changes in the acoustic signals enables the team to pinpoint leaks and measure the effective wall thickness of pipes without breaking ground or disrupting service.

“From an operation standpoint, we’re finding leaks before they surface. These are underground quiet leaks, with no indication of low water pressure or poor water quality,” says Jessie Koczynasz, Water Technologist at City of Cambridge. “This technology gives us the step ahead with its accurate near real-time data that allows us to locate and repair these leaks swiftly before a pipe burst - this really helps cast us in a positive light with our customers,” Koczynasz adds.

The leak detection technicians deploy mobile “lift & shift” acoustic loggers to scan an area for leak noise overnight; an application that is commonly practiced.  Locations identified with potential leak noise from the loggers are then field verified with the LeakFinderST to confirm the presence and exact location of leaks.

“What is really advantageous about this technology is its ease of use. You don’t need someone with a technical background to operate this system. After just one day of training by Echologics’ field engineers, and several weeks in the field, our leak detection technicians were fully equipped to properly implement the system in the field.” Koczynasz adds.

Improvements to the condition of Cambridge water system can be observed over the past decade. Just over the past couple of years since the use of this new system, the city has surveyed approximately 25km of water main. This application has helped the city unearth more than 50 sizable active leaks from distribution main and service lines buried underground.

According to the City of Cambridge, savings of 5,500 litre of water per minute (1,455 usgpm) were realized in the reduction in water loss. Costs associated with emergency repairs and the intangible reputational risk were also more efficiently managed as a result. “I would advise other municipalities to build a business plan to present the economic impacts of finding and repairing non-surfacing leaks,” advises Koczynasz. “This can justify the initial investment into a leak detection program. Engagement from all levels within your organization is important too,” Koczynasz concludes. 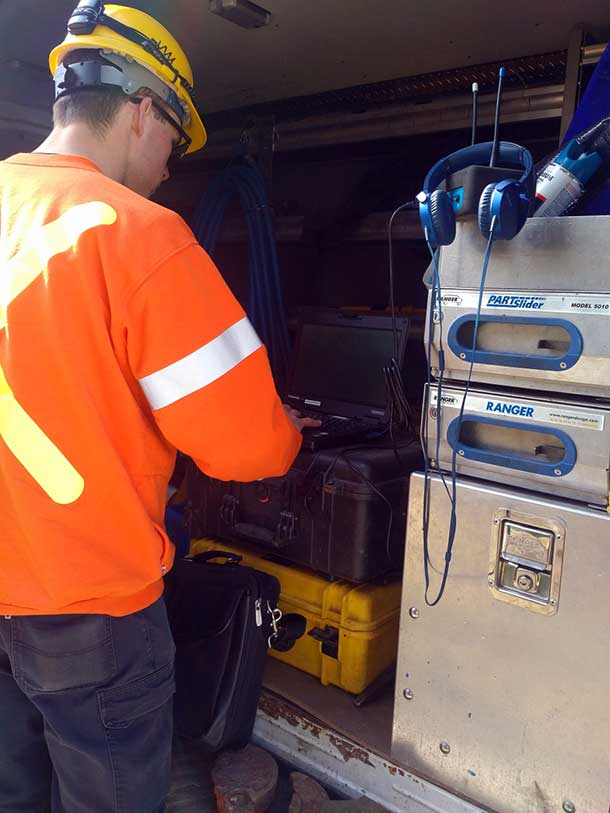 Click here to read the article in Trenchless Technology Magazine