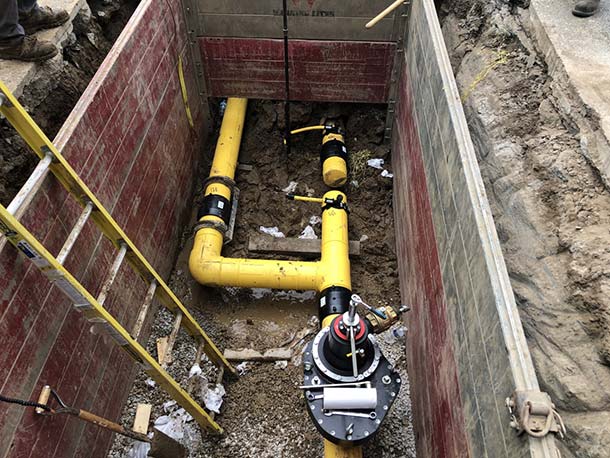 Spire Energy is a public utility serving more than 1.7 million customers in Alabama, Mississippi and Missouri, making it the fifth-largest publicly traded natural gas company in the United States.

A recent upgrade project in the St Louis, Missouri, metro area required connecting two different pressurized polyethylene (PE) mains. The utility did not want to perform this operation by squeezing the PE pipe, because that would put excessive strain on the pipe. However, Spire needed a 100% stop off to complete the work in a safe environment.

“Because we had no isolation valves available in this area, we decided to go with Shur Stop, a Mueller brand,” said Ray Hill, drill and stop supervisor for Spire Energy.

While relatively new for flow control in PE gas distribution systems, line stopping serves as a control or temporary valve. A line stopping system is inserted into the pipe using a hot-tap connection. To stop the flow of gas in the pipe, the line stopper and its housing are attached to an entry valve and mechanically lowered into the pipe. After the procedure is completed, the line stopper is removed and an integral plug is used to seal the hot tap connection.

This meant Spire had to cut behind the stopper on the high-pressure line. The other portion of the low-pressure main was capped and continued to operate at 25 psi.

“From the time you start drilling to actually achieving a 100% stop off, Shur Stop was faster than squeezing, and absolutely more reliable,” concluded Hill.

Click here to read the story on Pipeline & Gas Journal